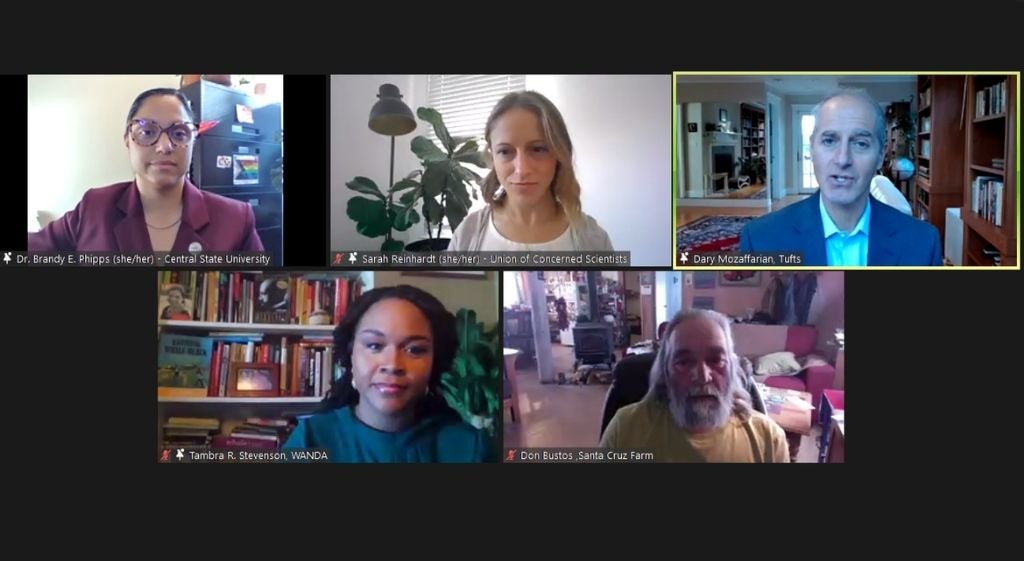 It was an agricultural science program in which he and his colleagues studied winter growing methods, allowing them to sell local ingredients to nearby public schools, Bustos said during a Jan. 26 Congressional briefing including scientists, researchers, and leaders in food production, co-hosted by Tufts University’s Friedman School of Nutrition Science & Policy and the Union of Concerned Scientists (UCS).

He was responding to Friedman School Dean Dariush Mozaffarian, who asked for his thoughts on the economic incentives for increasing federal investments in sustainable-farming research. Thanks to the program, Bustos said, his farmers could support themselves in the winter months, and students enjoyed healthy produce. As a bonus, the kids received an indirect education on the benefits of eating local.

“That’s a really simple breakdown,” Bustos said, before praising his fellow panelists for discussing practices that are already familiar to his Indigenous community.

Mozaffarian welcomed the sentiment, referring to the cycle Bustos described as a “holistic wheel of interconnectedness” that supports growing better food in ways that are positive for the planet and for people.

"Our food system is the leading contributor to poor health and also the leading contributor to depletion of our natural resources, and these are creating enormous economic losses in the hundreds and hundreds of millions of dollars every year,” Mozaffarian said. “We must invest in new ideas, technologies, and science to create a sustainable, equitable, and nourishing food system.”

The interaction between food production, nutrition, and the environment inspired the report on which the Jan. 26 briefing was based, From Silos to Systems, published by the UCS. It found that federal resources dedicated to exploring how current practices in food production affect nutrition, climate, and the health of communities are, in short, severely limited.