What Foods Are Better for the Earth? 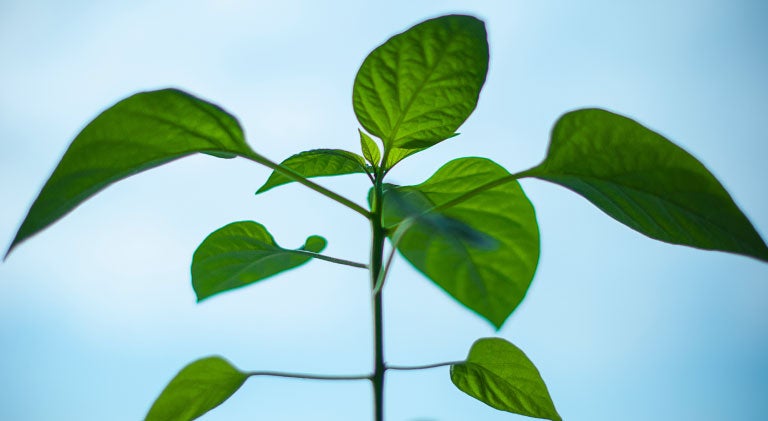 The recommendations of the Dietary Guidelines for Americans are devised to help Americans make healthy food choices for long-term health. But what about the long-term health of the planet that produces these foods?

Every five years, the U.S. Department of Health and Human Services and Department of Agriculture publish the evidence-based Dietary Guidelines for Americans (DGA) to inform national food, nutrition, and health policies and programs. Federal and state programs aimed at children, infants, women, and older adults all draw on the Dietary Guidelines to help guide individuals toward food choices that will maintain or improve their health and reduce the risk of chronic disease.

Of course, making those healthy choices depends on the land, water, air, and animals that provide the fruits, vegetables, meat, and dairy.

Nicole Tichenor Blackstone, N12, N16, an assistant professor at the Friedman School, is part of a team that studied the link between environmental sustainability and the 2015-20 Dietary Guidelines for Americans.

The team’s paper, published in The Lancet Planetary Health, built on work Associate Professor Tim Griffin and Professor Emerita Miriam Nelson began when they helped draft the Dietary Guidelines Advisory Committee’s first-ever chapter on food sustainability and safety for the 2015-20 Guidelines. Sustainability did not make it into the policy as the Department of Health and Human Services and Department of Agriculture determined the issue to be important, but beyond the scope of the Guidelines.

Tufts Now: What prompted you to study the environmental impact of the 2015-2020 Dietary Guidelines for Americans?

Nicole Tichenor Blackstone: We were interested in continuing to build the evidence base around dietary guidance and sustainability to inform future policy. This was the first year the DGA included three distinct eating patterns—Healthy US-Style, Healthy Mediterranean-Style, Healthy Vegetarian—as recommendations. These have some key differences, and we were curious how those differences might influence tradeoffs in environmental sustainability across the patterns.

How much do the three healthy eating patterns in the Dietary Guidelines for Americans differ?

Differences between the patterns include the amounts and types of protein recommended, as well as the amounts of fruit, dairy, whole grains, and discretionary calories. The largest differences were the amounts and types of protein. The U.S. and Mediterranean style patterns include the same amounts of protein foods except seafood; the Mediterranean pattern recommends almost double the amount of seafood compared to the U.S. pattern. The Vegetarian pattern, on the other hand, relies on plant-based proteins and eggs. It also has a lower overall protein foods recommendation than the other two patterns.

How did you determine the environmental impacts of the different diets?

The first step was determining the environmental burdens of each of the 321 foods in the patterns. We developed a method to map food life cycle assessments from three databases to each of these foods. Life cycle assessment is a systematic, science-based approach to estimate the potential resource use and pollution that occur throughout a product’s supply chain. In our case, the products were foods. After determining the food-based impacts, we then added them up for each of the patterns. We were able to analyze six impacts of the three patterns: climate change, land use, water use, water quality—fresh and marine—and air quality.