Friedman students tasked to represent views of North America in a global dialogue in Rome: Young scientists actively involved in UN priority-setting around the global actions needed to achieve healthy diets and nutrition.

On December first, Friedman representatives traveled to Rome to take part in the United Nations (FAO) and World Health Organization International Symposium on Sustainable Food Systems for Healthy Diets and Improved Nutrition as part of the Decade of Action on Nutrition. The event was described as a platform for discussion where "practical solutions and successful country experiences in implementing sustainable food systems will be shared." 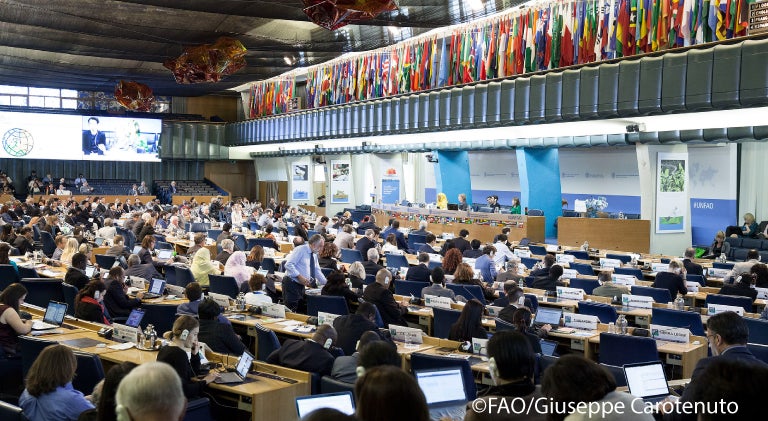 The Friedman School was chosen to represent North America in a student-led policy dialogue occurring as part of the symposium. Orion Kobayashi, M.S. candidate in the Food Policy and Applied Nutrition program, was appointed to speak on behalf of the Friedman student body. He is one of nine students from around the globe who participated in a live webcast discussion and presentation of the nutrition policy goals and research aims of preeminent academic institutions on all seven continents. "The fact that the UN has chosen The Friedman School means we have this role of being a small sample that reflects that larger voice about what sustainable food means in North America," said Kobayashi. "It's a great honor and a huge responsibility to bring these ideas forward."

Kobayashi places the lifecycle of policy formulation and implementation on a theoretical timeline akin to the crests and troughs of a wave: There are different key time points where policy decisions, like the U.S. Dietary Guidelines, are made, "but in between these key points," he says, "it's about building the discussion and getting crucial items on the agenda. These sorts of events provide an opportunity to do this."

"At an event like this, we are setting aspirational goals that will influence aid, donor decisions, and which kinds of projects will become key."

For example, Associate Professor Tim Griffin acted as an advisor to the 2015 Dietary Guidelines Advisory Committee, and continues to be an outspoken advocate for including sustainability issues within the scope of the next round of dietary guidelines in 2020. Sustainability was considered, but ultimately not included in America's 2015 Dietary Guidelines.  "Talking to Tim, he's very optimistic that because it was brought to the table last time, it provides more of an opportunity for this to be discussed in the next round," said Kobayashi. "At an event like this, we are setting aspirational goals that will influence aid, donor decisions, and which kinds of projects will become key."

The exchange of information and ideas across national boundaries can have a meaningful impact on both domestic and foreign nutrition policies, explains Kobayashi. For example, "A congressional committee may cite as guidance something that the WHO or UN FAO says," and the converse can occur as well: "Policies we implement domestically can influence how they are eventually implemented internationally. People pay close attention to what the US does in terms of funding."

"When we think food systems we tend to think locally, but on a real level the food system is international and it doesn't stop at the border."

In the Fundamentals of Nutrition Policy course at the Friedman School, students learn how a bill becomes a law, says Kobayashi. "This kind of thinking, on a larger global scale, can seem overwhelming" but, he stresses, conversing and sharing ideas with others around the globe is a tangible way to be active. "When we think food systems we tend to think locally, but on a real level the food system is international and it doesn't stop at the border."