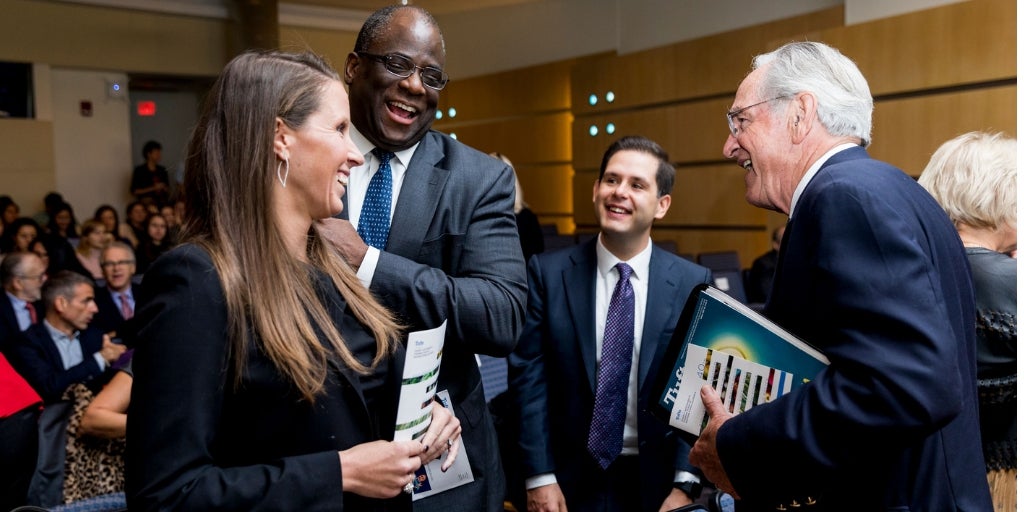 Long before Jean Mayer became the tenth president of Tufts University in 1976, he was a war hero. He fought with French forces in the battle of Dunkirk. After one skirmish with German soldiers, he had to walk several days with a bullet in his foot, leaving him with a permanent limp.

So it’s no wonder that when Mayer decided to take on the challenge of creating the first school of nutrition in the country, he did it with determination.

Mayer was a brilliant bench scientist, said Dariush Mozaffarian, dean of the Friedman School, but he knew that nutrition is also about behavior, economics, and policy.

“He really understood translating science into action,” Mozaffarian said. “That really to this day defines the Friedman School.”

On October 18, the Friedman School celebrated forty years of the university turning science into action by presenting the inaugural Jean Mayer Prize for Excellence in Nutrition Science and Policy to two people and two organizations that have embodied Mayer’s unwavering pursuit of a healthier world.

The $100,000 prize, sponsored by John Hancock, went to retired U.S. Senator Tom Harkin of Iowa; former U.S. Secretary of Agriculture Tom Vilsack; the consumer advocacy Center for Science in the Public Interest (CSPI); and the nonpartisan policy group Mission: Readiness. Harkin and Vilsack asked that their shares of the award be given directly to charities they designated.