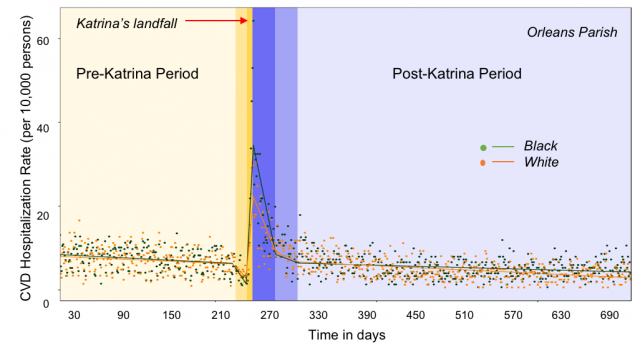 BOSTON (Jan. 31, 2019)—Natural disasters such as earthquakes, tornados, and hurricanes are generally described in terms of wind speed, land area, and inches of rain. They’re also described in terms of human costs, such as the number of fatalities and injuries. Hurricane Katrina, for example, led to approximately 1,000 deaths in Louisiana, of which 75 percent were among adults age 60 or above.

What are the hidden health costs, though, that might not be reported immediately, but which are a result of a natural disaster? Some studies have looked at stress disorders, but a new study from researchers and scholars at Tufts University examined changes in the number of cardiovascular disease (CVD) hospitalizations before and after Katrina, and the disparate effect of Katrina on black and white older adults in Louisiana.

The co-first author on the study is Ninon Becquart, a former scholar in the NIH-funded Post-Baccalaureate Research Program (PREP) at Tufts who used R, SQL, and ArcMap to conduct sophisticated data analysis, including visualization. She was mentored on the research project by Elena Naumova, chair of the Division of Nutrition Data Science at the Friedman School of Nutrition Science and Policy at Tufts.

“Our goal with this research was to contribute to a methodology to assess the impact of natural disasters,” said Becquart. “We saw that rates spiked after Katrina’s landfall in all older adults, especially in older black adults. The rates appear to stabilize about two months after landfall, which coincides with the clearing of floodwaters from New Orleans.”

“We can expect to see more natural disasters because of climate change. Our study is one of the few that addresses the impact of natural disasters on CVD hospitalization rates, as well as disparities in hospitalization rates between black and white older adults,” said Naumova. “Considering the staggering social, economic, and health impacts of such disasters, we hope this study leads to more research and helps to inform emergency health preparedness.”