How Do You Measure Collaboration?

How do you measure collaboration?

Robin Shrestha, N15, regional project manager for the Feed the Future Innovation Lab for Nutrition, also known as the Nutrition Innovation Lab, has helped conduct research that encompasses this fundamental question. The highly anticipated findings were presented by Shrestha’s colleagues in July 2016 at the 4th Annual Scientific Symposium in Nepal.

"We were trying to come up with metrics to measure the commitment of the government in Nepal to translating nutrition research into policy action," says Shrestha. Working under first author and Director of the Innovation Lab, Dr. Patrick Webb, the team concluded that multi-sector collaboration between the government and nutrition researchers to implement integrated interventions in agriculture, nutrition, and health had increased. This was substantiated by Nepal's astonishing attainment of nearly all of the Sustainable Development Goals set out in the United Nations' 2015 Millennium Development Goals.

"We were trying to come up with metrics to measure the commitment of the government in Nepal to translating nutrition research into policy action."

This increase in connectivity between science and policy in Nepal can be attributed in part to the work of the Nutrition Innovation Lab. Since 2012, they have worked in Asia and Africa to build capacity for nutrition research and interventions to take place, while also creating standards of capacity development that would serve as beacons of sustainability and examples for scaling similar interventions for other countries. 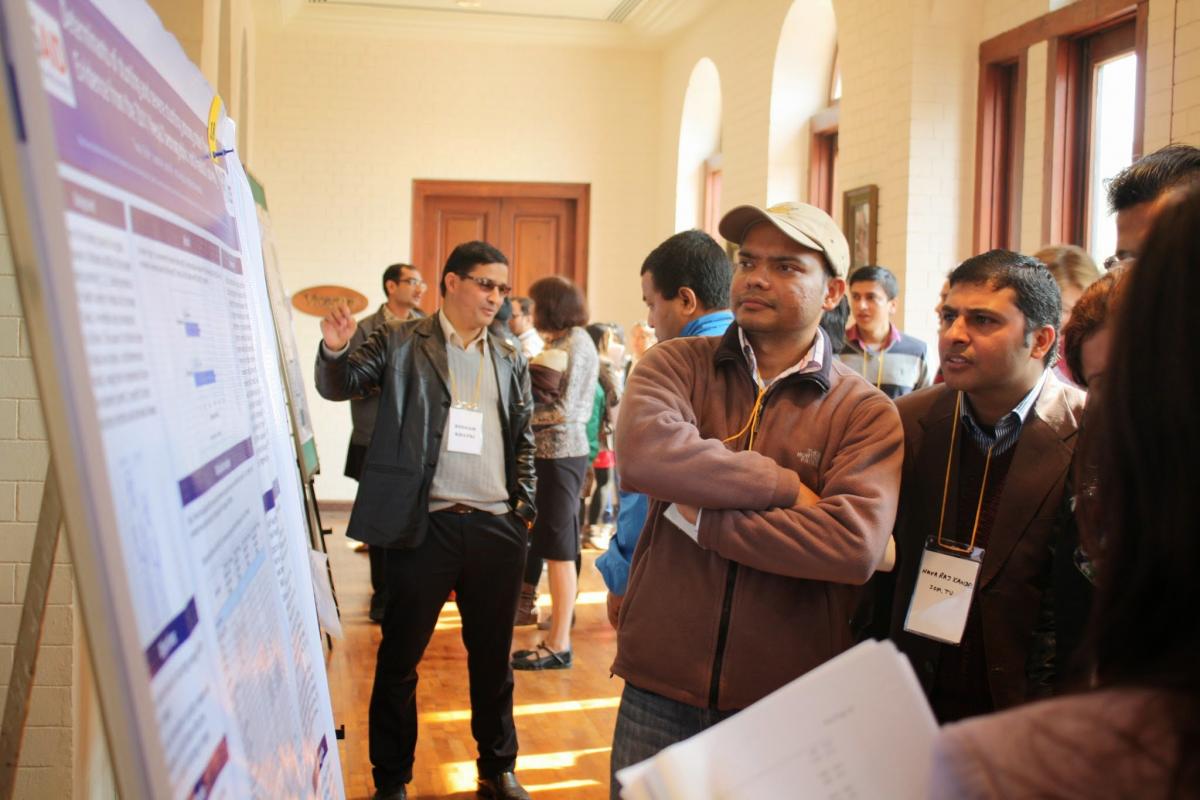 Students and researchers speak with poster presenters at the 2016 Scientific Symposium in Kathmandu, Nepal.

A crucial part of building capacity in Nepal is the creation of an environment that promotes conversations around nutrition, agriculture, and policy linkages. This year, the 4th annual Scientific Symposium in Nepal focused on dissemination of research findings among professionals from all sectors concerned with agriculture, food security, health, and nutrition in Nepal. One of Shrestha's most important roles at the Symposium was to bring local students, researchers, and government officials to the same table.

"Our prime objective is to close the gap between policy makers and researchers."

"The symposium has always focused on attracting young scientists from different institutions in Nepal," Shrestha says, "just the opportunity for the students to talk to professionals, it’s a lot." It's not only students and researchers who attend the conference: "The participation from the government has been encouraging and we’ve witnessed an increase in their willingness to be a part of this," says Shrestha, "The symposium is the right platform for them to learn what has and hasn’t worked."

This year saw even greater government participation. The vice-chancellor of the National Planning Commission, joint secretaries from the Nepal Department of Agriculture, and the Ministry of Health were in attendance as well as an assortment of representatives from national and international NGOs. "Our prime objective is to close the gap between policy makers and researchers," says Shrestha.

"They want to do it on their own....That means half of our mission is already complete, the capacity is there for them to take the initiative to do this themselves."

This year's Symposium was attended by 340 participants including local, regional, and international scientists, program implementers, policy makers, and students from 18 national and international academic institutions. "Participation keeps increasing each year! The way people have received this, it’s become an annual nutrition fair," says Shrestha. "We had to close down the registration early because we would have exceeded our max capacity." As the event grows larger, local partners in Nepal are increasingly willing to play a bigger role in planning the symposium. In fact, they want to be involved from the very beginning. "They want to do it on their own,” says Shrestha. "That means half of our mission is already complete, the capacity is there for them to take the initiative to do this themselves...they are also very interested in the research we do. That’s what we want to see, that’s what I want to see. We are creating that environment."

The Feed the Future Innovation Lab for Nutrition will continue to hold annual Scientific Symposiums in Nepal. Planning is underway for a similar event to occur in Uganda in Spring 2017.