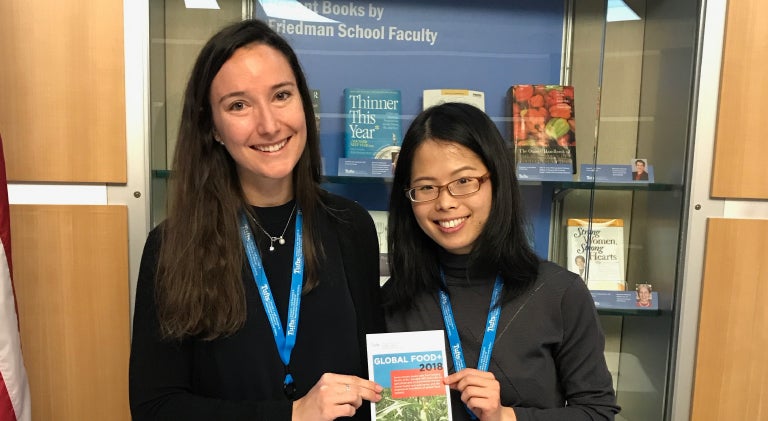 The second annual Global Food+ Symposium was hosted at Tufts University’s Friedman School this year. Innovative research being conducted at Tufts, MIT, Boston University, and Harvard University in the realm of the global food system was presented in speed-dating style, with each speaker giving only a seven-minute talk. Only some of the takeaways are reported here; the entire event can be viewed online.

February 16, 2018 marked the second annual Global Food+ Symposium, hosted by Tufts University at the Friedman School of Nutrition Science and Policy. This year, 23 researchers from Boston University, MIT, Harvard, and Tufts shared the findings of their work in seven-minute presentations on topics ranging from microbiology to nutrition to theology.

I attended the conference in its entirety from 12:30 to 4:30 on a Friday afternoon because I wanted to learn about what other researchers in our consortium of schools are investigating, and to gain insight into what the non-Friedman community has to say about the global food system.

....There are steps we can take right now to plan for uncertainty in the face of climate change.

Throughout the afternoon, speakers presented fascinating research that touched every corner of the food system. Several presenters from Harvard and MIT discussed how water affects our food system, covering everything from breeding crops to use less water, to developing more adaptable water conserving technologies, and the ramifications of developing a water market in which price reflects scarcity. These speakers together illustrated that whether in the Zambezi River Basin or in Melbourne, Australia, water use and availability affects our food system, but there are steps we can take right now to plan for uncertainty in the face of climate change.

Most of the presenters at the symposium used or researched cutting-edge technology to answer some of the most vexing problems in our global food system.

Nutrition was, of course, the subject of several of the presentations. Tufts professor Will Masters discussed his findings on the nutritional quality of baby food. Spoiler alert: the global baby food supply is not actually that nutritious. Alison Brown, a post-doctoral fellow at Tufts presented the research from her dissertation comparing the diet quality and risk of hypertension in foreign-born non-Hispanic blacks to those of U.S.-born blacks. Her findings suggest that the former are better-off than the latter. While useful for developing culturally-appropriate nutrition strategies, it does not delve into the root causes of these differences. A more causal-based study would be useful if the intention were to narrow the gap in diet quality and health between these groups.

Most of the presenters at the symposium used or researched cutting-edge technology to answer some of the most vexing problems in our global food system. Karthish Manthiram from MIT, for example, presented his research on how electricity derived from solar panels can be used to create fertilizer. His research found that by using electric voltage in place of high temperatures, a low-footprint nitrogen fertilizer can be created and used by small-scale farmers in even the remotest parts of Africa.

"...one specific technology is not going to be a silver bullet."

Angela Rigden, a post-doctoral fellow at Harvard University, presented exciting research derived from new satellite data. These data showed that vapor pressure and root zone soil moisture actually explain significantly more variability in crop yields than does temperature alone. Both Jenny Aker from Tufts and Alicia Harley from Harvard separately explored the effects of having access to technology for poor farmers in Africa and India, respectively. They found that even where a technology exists, the targeted problems may not be solved in exactly the way they were intended. For example, Alicia Harley’s research found that poorer rice farmers were not adopting a system of rice intensification (SRI) that used less water because such a practice required control over one’s water source—a luxury most poor farmers do not have. As Jenny Aker put it, one specific technology is “not going to be a silver bullet.”

Water, technology, health, and sustainability were the overarching themes that wove the presentations together. But one researcher stood alone both in his discipline and in his ability to wow an audience of entirely dissimilar mindsets. Dan McKanan, a senior lecturer in Divinity at Harvard University, revealed that the foundations of organic agriculture, organic certification, WWOOFing, biodynamic agriculture, community supported agriculture, and the environmentalist movement all sprung out of a religion called Anthroposophy. In his words, this was a religion that acted as an antidote to the ideological monoculture system—an antidote to the “monocultures of the mind.”

What the innovative research presented at the Global Food+ Symposium made me realize is that there probably will never be a “silver bullet” that can solve the issues of water scarcity, food insecurity, malnutrition, or climate change. But the research that is being done in these interdisciplinary and diverse fields is worth pursuing, whether it aims to solve a big problem in a small place or a small problem on a global scale.

Sam Jones is a first-year AFE student with a passion for sharing others’ stories. She is currently an intern at Culture Magazine and hopes to pursue a career in sustainable agricultural development and food journalism.

This article was originally published online by our student newspaper, The Friedman Sprout.