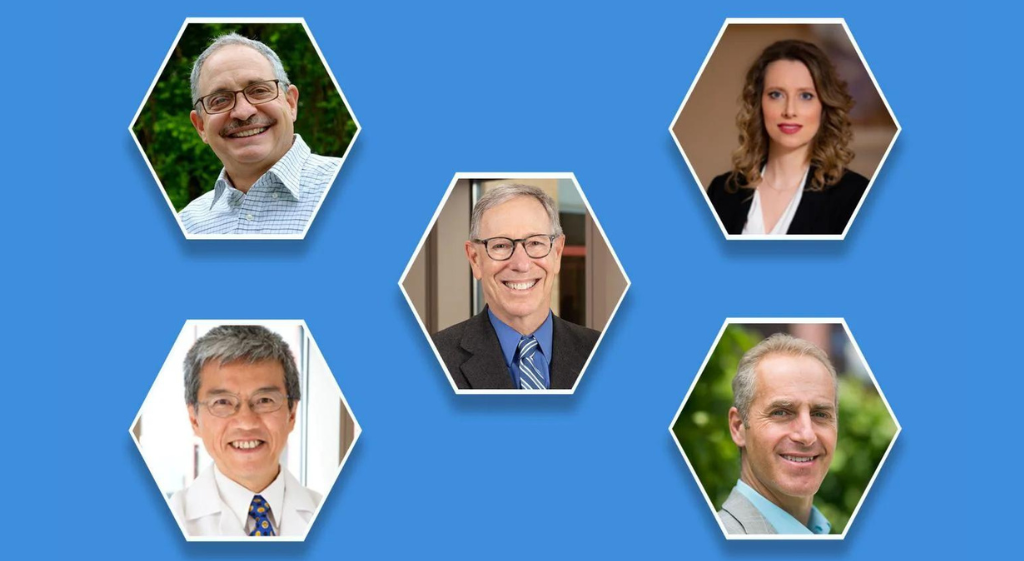 Five current Tufts researchers have been named to the Clarivate 2022 list of the world’s most highly cited researchers.

The researchers in the list “are having a significant impact on the research community as evidenced by the rate at which their work is being cited by their peers,” according to Clarivate, an information and analytics firm focused on research.

The highly cited papers rank in the top 1% by citations for a field or fields and publication year, and only about 1 in 1,000 researchers worldwide qualify.

Named to the list are David Kaplan, Andrew Levey, Renata Micha, Dariush Mozaffarian, and John Wong. “These individuals are helping to transform human ingenuity into our world’s greatest breakthroughs,” said David Pendlebury, head of research analysis at the Institute for Scientific Information at Clarivate.

Also included as a top-cited researcher was Maria Flytzani-Stephanopoulos, a Tufts professor who died in 2019.

For this year’s analysis, the papers surveyed were the most recent available—those published and cited during 2011 to 2021.

“Having our faculty being among the top-cited researchers worldwide is an honor, and a welcome recognition of their ground-breaking work,” said Bernard Arulanandam, vice provost for research at Tufts. “I want to congratulate each of them for this achievement.”

David Kaplan is the Stern Family Professor of Engineering, a professor of biomedical engineering, and Distinguished University Professor, and holds appointments in several other Tufts schools and departments. His research focus is on biopolymer engineering, tissue engineering, regenerative medicine, and cellular agriculture. He has published more than 1,000 peer-reviewed papers, is editor-in-chief of ACS Biomaterials Science & Engineering, and serves on many editorial boards and programs for journals and universities.

He directs the Kaplan Lab and the Initiative for Neural Science, Disease & Engineering; is co- investigator at the Tissue Engineering Resource Center; and is director of the Cellular Agriculture Program at Tufts. He has received a number of awards for teaching, is an elected fellow of the American Institute of Medical and Biological Engineering, and has received the Columbus Discovery Medal and the Society for Biomaterials’ Clemson Award.

Andrew Levey is a professor of medicine and Dr. Gerald J. and Dorothy R. Friedman Professor of Medicine emeritus at Tufts University School of Medicine and chief emeritus of the William B. Schwartz Division of Nephrology at Tufts Medical Center. He is involved with research groups at Tufts and around the world studying ways to gauge kidney function and better understand the burden of chronic kidney disease.

He has been honored by the U.S. National Kidney Foundation and the European Renal Association for his lifetime of dedication to the treatment of kidney diseases. In 2013 he was named the recipient of the American Society of Nephrology’s Belding H. Scribner Award, presented to individuals who have made outstanding contributions that have had a direct impact on the care of patients with kidney disease.

Renata Micha is an adjunct associate professor at the Friedman School of Nutrition Science and Policy. She has expertise in nutritional and chronic disease epidemiology—focusing on diet assessment and modeling of impacts on cardiometabolic health—and in nutrition and health policy.

Micha has particular interest and experience in global dietary assessment among various population subgroups, identifying causal diet-disease relationships, quantifying and modeling the impact of dietary habits on cardiometabolic disease outcomes, and evaluating the comparative- and cost-effectiveness of nutrition-sensitive population interventions to address these disease burdens.

Dariush Mozaffarian is the Jean Mayer Professor at the Gerald J. and Dorothy R. Friedman School of Nutrition Science and Policy and a professor of medicine at the School of Medicine, as well as special advisor to the university provost and dean for policy at the Friedman School. His work aims to create a food system that is nutritious, equitable, and sustainable.

A cardiologist, he has authored more than 500 scientific publications on dietary priorities for obesity, diabetes, and cardiovascular diseases—and on evidence-based policy approaches to reduce these burdens in the United States and globally. He has served in numerous advisory roles including for the U.S. and Canadian governments, and his work has been featured in a wide array of media outlets.

John B. Wong is a professor of medicine at Tufts University School of Medicine and vice chair for academic affairs and chief of the Division of Clinical Decision Making at Tufts Medical Center. He is also the director of comparative effectiveness research at the Tufts Clinical and Translational Science Institute.

His research focuses on the application of decision analysis to help patients, physicians, and policymakers choose among alternative tests, treatments, and policies. The aim is to promote rational, evidence-based, efficient, and effective patient-centered care. He has served on many national and international committees, including ones for the World Health Organization, Centers for Disease Control and Prevention, National Academy of Medicine, and U.S. Preventive Services Task Force.

Maria Flytzani-Stephanopoulos was the former distinguished professor and Robert and Marcy Haber Endowed Professor in Energy Sustainability in the Tufts School of Engineering. She was a world-renowned expert in chemical engineering, a co-recipient of the American Chemical Society (ACS) Catalysis Lectureship Award for the Advancement of Catalytic Science in 2019. In 2014, she was elected to the National Academy of Engineering in recognition of her contributions to clean energy technology, one of the highest professional distinctions accorded an engineer.