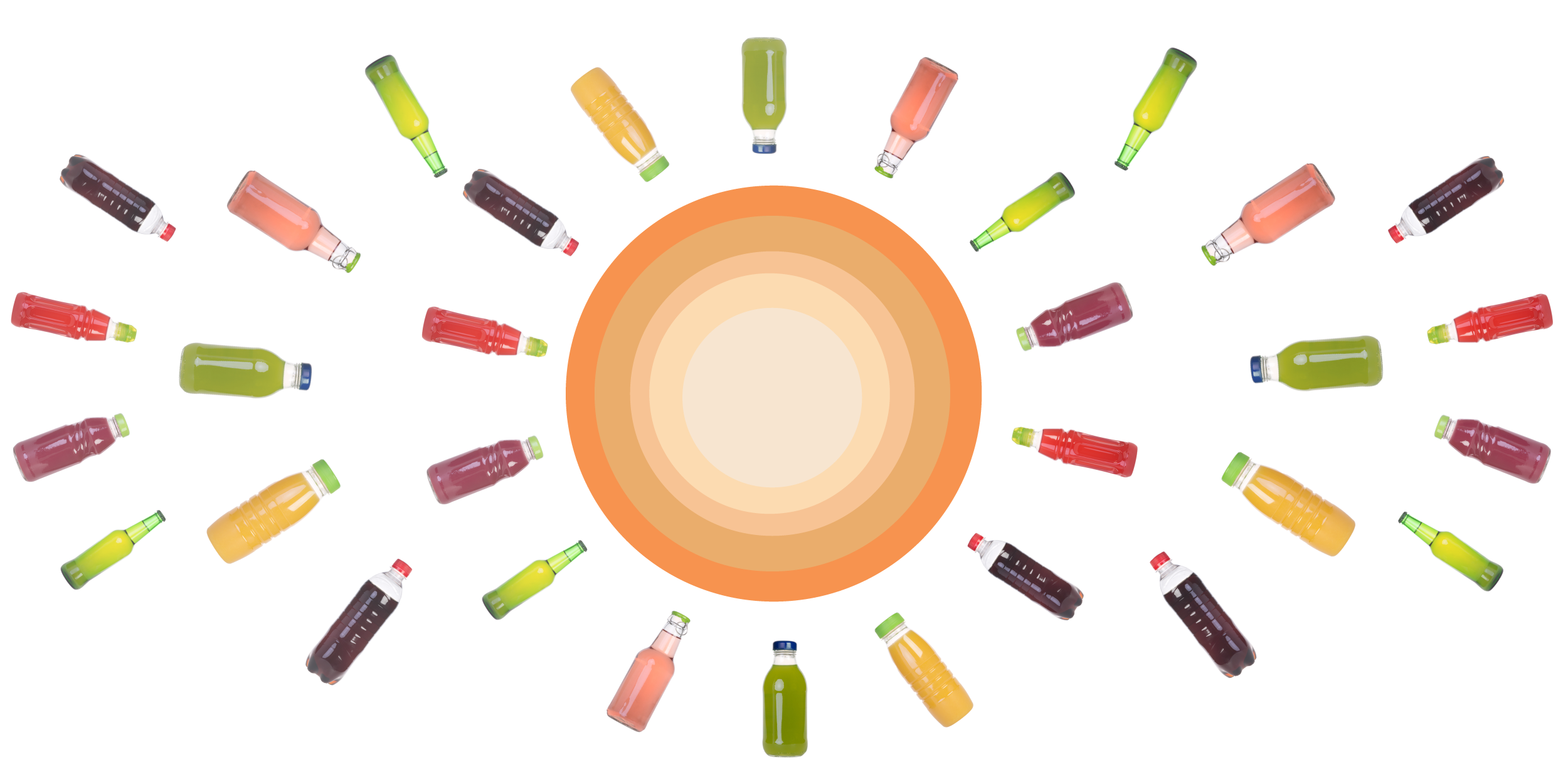 Concern about the health effects of sugar-sweetened beverages is mounting. Compelling research out of Friedman and the HNRCA has linked consumption of SSBs to non-alcoholic fatty liver disease, and to 184,000 deaths per year in the world due to diabetes and other obesity-related diseases. This spring, researchers and students at Friedman decided to take action.

In February of 2015, Friedman doctoral candidate Alison Brown initiated a collaboration with the Family Department of Medicine at Carney Hospital in Dorchester, the goal of which was to develop visual tools physicians could use to educate their patients about the health effects of sugar- sweetened beverages. 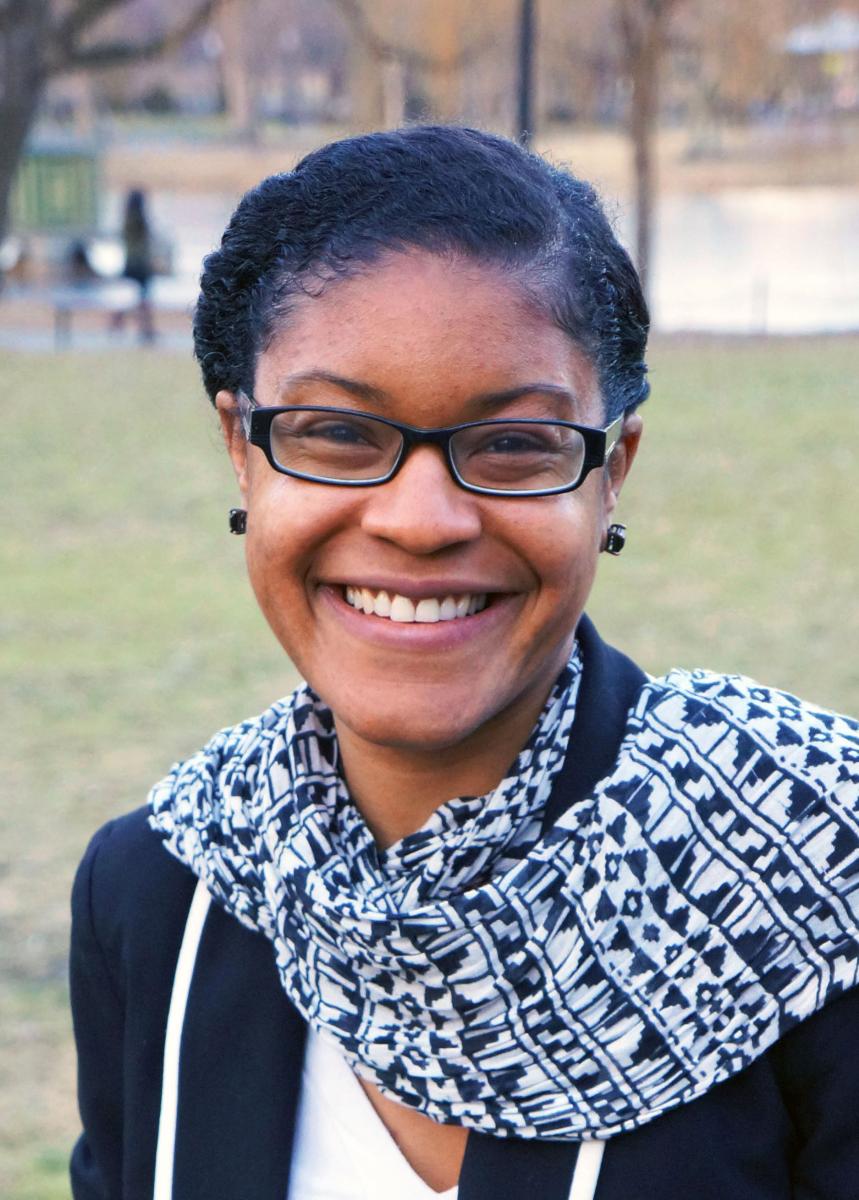 “This all started because Alison Brown and I happened to cross paths and shared our interests in public health,” says Michael Richardson, MD, lead resident at Carney Hospital’s Department of Family Medicine. Beginning with a didactic discussion with department residents, Brown, under the mentorship of Professor Sara Folta, took what started as a brainstorming session and turned the resulting ideas into a remarkable directed study opportunity where Friedman students could turn research into practice.

Brown, under the mentorship of Professor Sara Folta, took what started as a brainstorming session and turned the resulting ideas into a remarkable directed study opportunity... 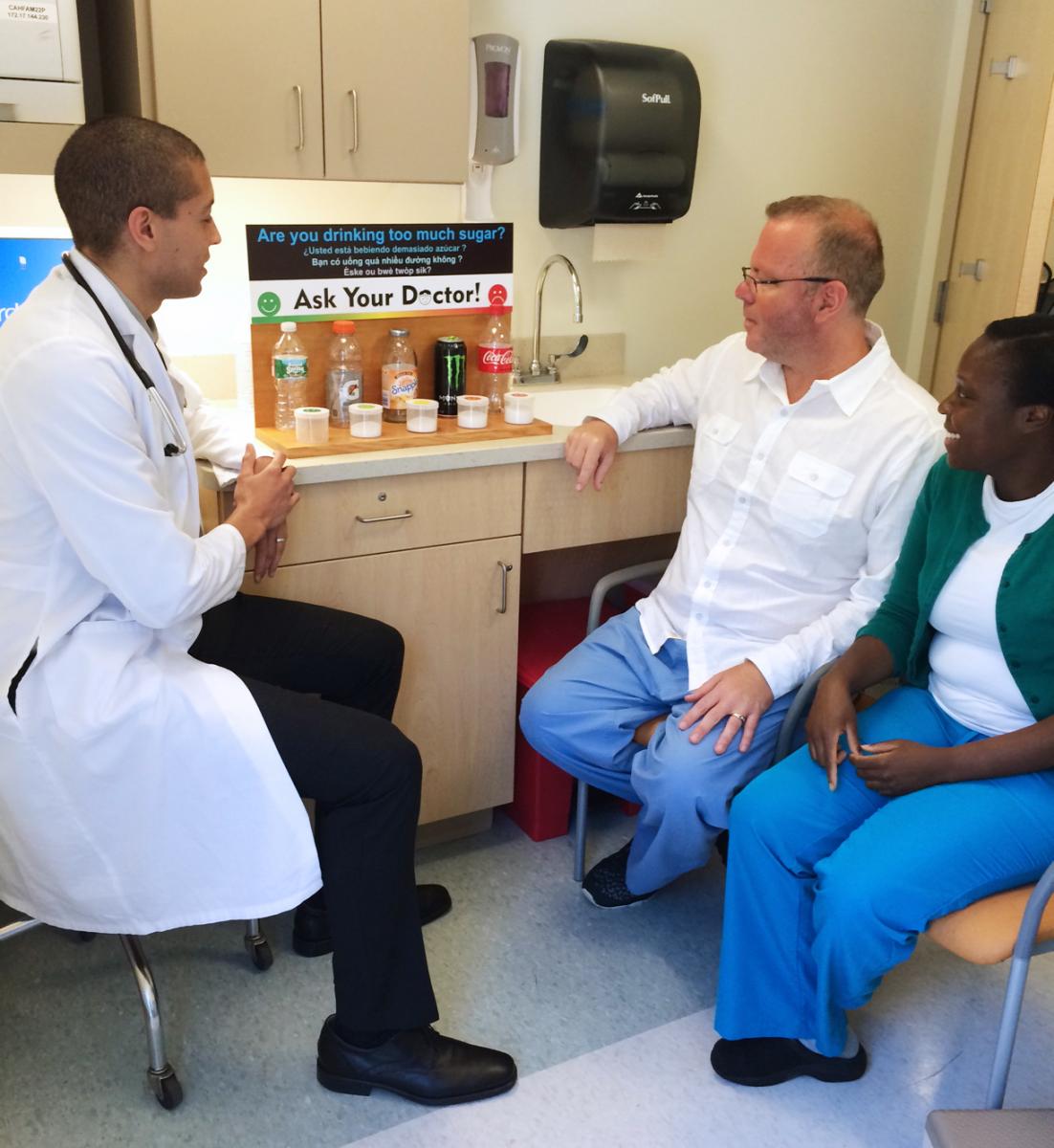 was a critical step toward developing relevant materials. “Our initial meeting with Dr. Richardson gave us great insights into the nutritional needs of the Dorchester area and Carney’s patients.  Further research into demographic data of the area, as well as a drive-through tour of Dorchester, gave us a better sense of what the population as a whole had to deal with nutritionally,” says Sandra Rosenbluth, a student in Friedman’s Nutrition Interventions, Communication, and Behavior Change program who worked on the project. “Nutrition is always a concern in any underserved community, but what makes Dorchester unique is its multicultural and multilingual population,” adds Richardson, “The real challenge for the Friedman students was delivering a message that could be understood across cultures and translated at an appropriate medical literacy level.”

The question, “Are you drinking too much sugar?” was displayed prominently across the top of the showpiece.

To develop physician-patient talking points around SSBs, students focused primarily on a study out of Johns Hopkins that used messaging about how much exercise would be required to burn calories in soda drinks, in an effort to decrease SSB consumption. “We needed to figure out how to get the message across simply and easily,” says Rosenbluth. What resulted was a portable model showing common sugary drinks displayed adjacent to their relative sugar contents, measured into clear plastic containers. The question, “Are you drinking too much sugar?” was displayed prominently across the top of the showpiece, repeated in the four most common languages in Dorchester: English, Vietnamese, Spanish, and Haitian-Creole. “The model serves as a talking piece; it’s a prompt for people to have a conversation with their doctor,” says Rosenbluth. 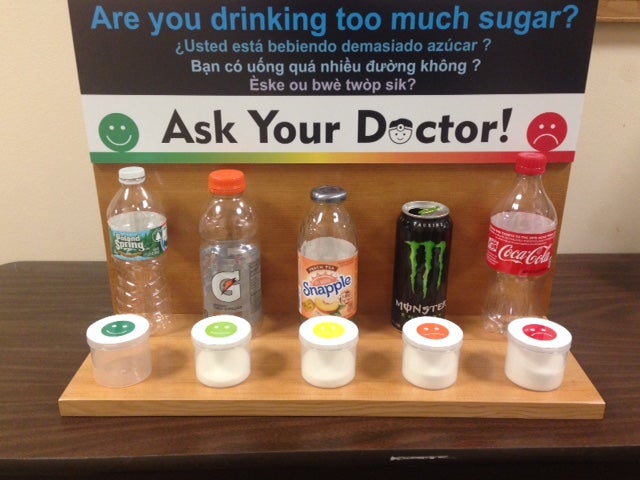 “When the students presented their work, the physicians were floored.  Their final product was so well done and appropriate for our clinic needs,” says Richardson. With tentative plans in the works for a future directed study course where the effectiveness of this project will be evaluated, Richardson is optimistic about the possibility of continued collaboration with Friedman students and faculty. “Being a part of something that not only benefits the community I work in, but also creates more change agents in the community is incredibly fulfilling and something I wish to continue,” he says.  For Alison Brown, the project was a rewarding example of the ways in which nutrition research can intersect with social activism:

“I’m passionate about working with minority populations to reduce racial and ethnic health disparities in diet-related diseases, so this experience allowed for me to continue to do the work that I love,” says Brown, “In just 10 or so weeks, the students designed communication materials for the patients and physicians in order to foster more meaningful conversations about food, nutrition, and physical activity. These efforts are a step in the right direction that I hope will have a true impact and lead to healthy and positive changes in people's lives.”