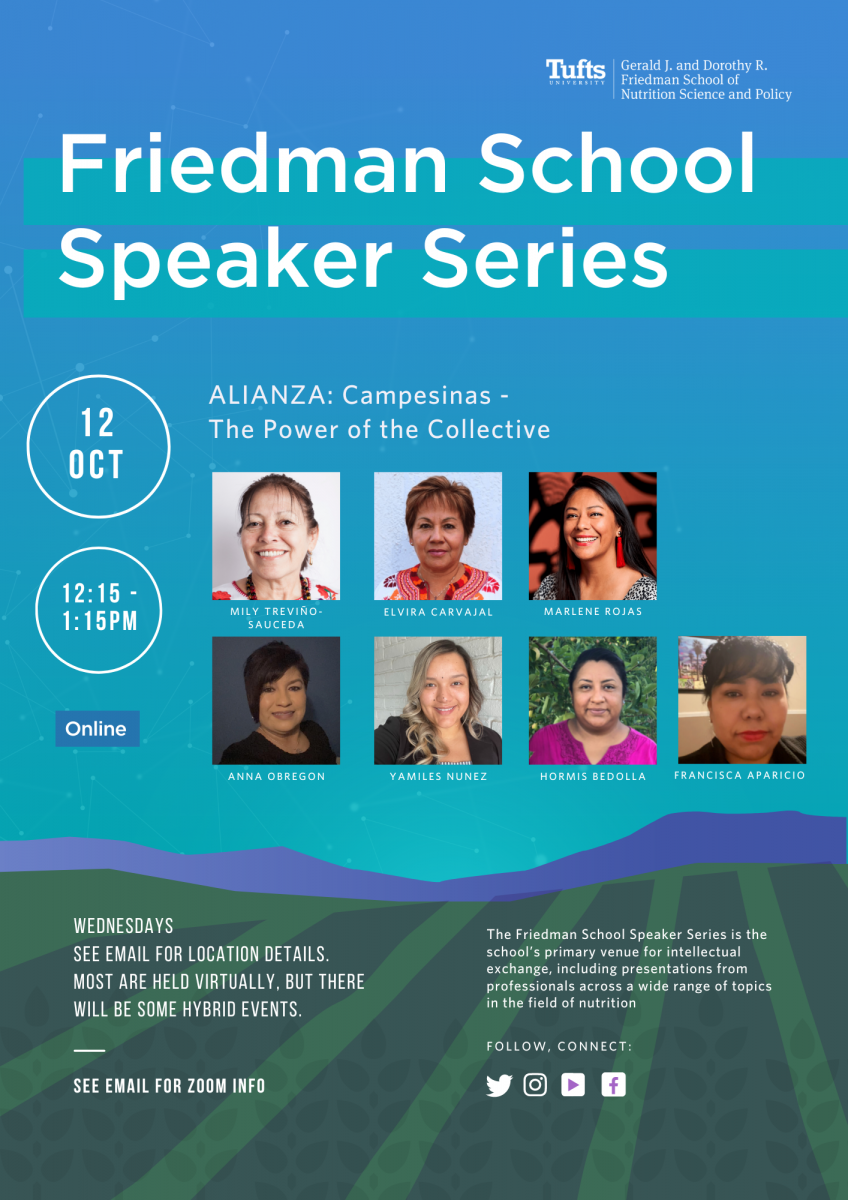 "ALIANZA: Campesinas -The Power of the Collective"

Alianza Nacional de Campesinas is the first national women farmworkers’ organization in the U. S. created by current and former women farmworkers, along with women who hail from farmworker families. Our four priority areas, which emerged from our convenings with campesinas, include addressing the harms caused by pesticide exposure, ending gender-based violence, promoting comprehensive immigration reform, and protecting farm workers' labor rights.

Farmworker women are often at the intersection of many injustices which pose a unique set of challenges that many others do not face. They have been at the forefront of the farmworker justice movement for many years. Our mission is to unify the struggle to promote women farmworker’s leadership in a national movement to create broader visibility and advocate for changes that ensure their human rights. In this session we will be sharing how Alianza came to be, the work that we are currently doing, and how you can support farmworker women and the farmworker justice movement.

Mily Treviño-Sauceda is the Executive Director & Co-Founder of Alianza Nacional de Campesinas, Inc. She co-founded “Mujeres Mexicanas,” in 1988, the pioneer campesinas group that led to building the Power of the Collective and create the idea to a campesinas’ movement; and also co-founded Líderes Campesinas in 1992, the first state-based farmworker women's unique grass roots organization advocating on behalf of campesinas where she served as Executive Director for over 12 years. Ms Treviño-Sauceda holds a Masters degree in Social Sciences: Rural Development, Capacity Building, Women’s Leadership and Oral History, from Antioch University Midwest. She has received numerous awards as a changemaker and for her commitment to social, economic and political justice. For over 40 years, Ms Treviño-Sauceda, has worked on farmworker women’s issues in the state of California, nationally and internationally.

Elvira Carvajal is a Co-founder and National Lead Organizer of Alianza Nacional de Campesinas, Inc. Originally from Michoacán, Mexico. She started working in agriculture at the age of eight. After losing a pregnancy due to the kind of work she was doing at a nursery in Florida, Ms. Carvajal started volunteering with the Farmworker Association of Florida (FWAF) in the late 1990s. Later becoming an Area Coordinator and helping start initiatives within the FWAF to talk about gender issues and art. Through all this, Ms. Carvajal has been an advocate for the farmworker community. Interacting daily with the community, conducting pesticide health and safety trainings with community members, dealing with cases of wage theft and workplace harassment, reporting cases of pesticide exposure, helping families impacted by immigration detentions/deportations, and more.

Marlene Rojas Lara is a consultant working with Alianza Nacional de Campesinas on policy and organizing, serving as the National Lead Organizer. Born in Mexico City, she migrated to Minnesota in 1998. She left her home as millions like her also did as a result of NAFTA. Rojas has become a political organizer who works across racial lines with a focus on immigrant rights. Since 2009 she has been actively organizing GOTV efforts for presidential elections for the Democratic Party, as well for candidates in MN and elsewhere around the country. Helping to pass the MN Dream Act (i.e. the MN Prosperity Act) in 2013, she continues her activities in that state by working with a coalition of actors who advocate for providing Drivers Licenses to everyone, regardless of their immigration status. She worked to bring Municipal IDs to the city of Northfield, the first in the state. Also in Northfield, Rojas co-founded the first Latinx Radio Show and became a board member of the non-profit organization, Rice County Vecinos Unidos.

Anna Obregon is the Supervisor of the Violence Against Women Initiative of Alianza Nacional de Campesinas. She is a third-generation migrant farmworker who experienced life altering domestic violence and various forms of sexual violence resulting from unresolved childhood incest. By necessity, she developed a hard-working ethic along with a strong desire to hault the suffering for herself, her family, and others; consequently, this manifested into 20+ years in the violence against women movement. Through hands-on trauma-informed training, she has learned how to transform her life emotionally, psychologically, and spiritually through various mindfulness techniques.

Yamiles Nunez is the Communications and Media Specialist of Alianza Nacional de Campesinas. Ms. Nunez holds a Bachelor's degree in Political Science from the University of Houston. She joined Alianza in 2021 and since then has worked to provide broader visibility to the issues that farmworker women face.

Hormis Bedolla is a Regional Organizer in the state of New York for Alianza Nacional de Campesinas. She immigrated to the United States from Mexico twenty years ago and has since worked as a farmworker. In her home country she did social work with youth, women and children. She has been advocating for immigrant, migrant  and farmworker rights for over 10 years.

Francisca Aparicio is a Regional Organizer in the state of Oregon for Alianza Nacional de Campesinas. She has worked with organizations like Causa Oregon and PCUN since 2020. She has worked hard to bring essential resources to farmworker communities and helped to pass HB 2015 Equal Access to Roads Act, which granted driver's licenses to thousands of immigrants living in the state of Oregon.