Please visit go.tufts.edu/coronavirus for the latest from Tufts University. Read more about Fall 2020 at the School. 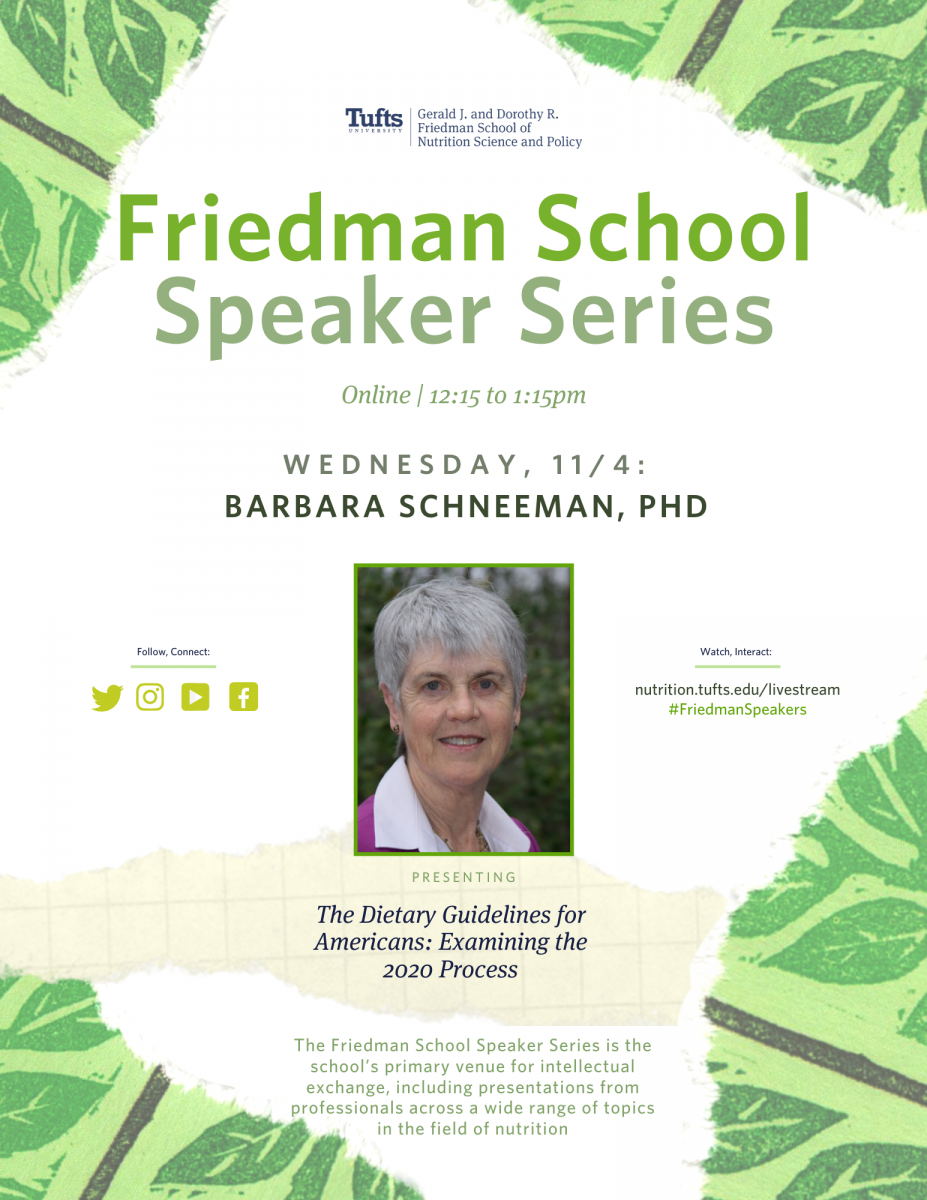 "The Dietary Guidelines for Americans: Examining the 2020 Process"

The Dietary Guidelines for Americans (DGA) have been released every 5 years since 1980. The DGA serves as the cornerstone of federal nutrition programs and policies to provide food-based recommendations that lower risk for diet-related chronic diseases, are nutritionally adequate, and promote health for the general public. Historically the Guidelines have focused on the population that is 2 years and older, but, beginning with the 2020-2025 DGA, they will also include recommendations for infants and toddlers and women who are pregnant or lactating.

Since 1985 the US Department of Agriculture (USDA) and the Department of Health and Human Services (HHS) have appointed a federal advisory committee to evaluate scientific evidence for updating the DGA. The responsibilities of the advisory committee are governed by the Federal Advisory Committee Act (FACA) and include the review of scientific evidence and drafting a report based on this review to provide advice to the Secretaries of USDA and HHS as these department update the DGA. The Federal government is responsible for preparing the DGA for use by nutrition policy makers and health professionals.

With each 5-year cycle of the DGA, the Dietary Guidelines Advisory Committee (DGAC) has had various resources available to develop its update, including expert opinion, authoritative consensus reports, and, to remain current, utilizes analysis of Federal data sets, food pattern modeling, and systematic reviews. In 2017 a NASEM report made recommendations to redesign the process to update the DGA to enhance the integrity of the DGA process and several of these recommendations were incorporated into the 2020-2025 process. One of the initial steps taken by USDA and HHS was to revise the website for the DGA to better enable the public to follow the process for updating the Guidelines and provide input during the process (www.dietaryguidelines.gov).

The 2020 Committee consisted of 20 members from academic institutions and held 5 public meetings to discuss the protocols for analyzing evidence and the findings and conclusions from its evidence review. Between public meetings, the Committee worked in subcommittees to develop the information for full committee review and discussion. To develop our conclusions and advice to the Secretaries of USDA and HHS, the Committee reviewed more than 150 analyses of federal data sets, numerous food pattern modeling analyses across the life span (including birth-24 months), and screened more than 270,000 citations to identify about 1500 original research articles included in 33 original systematic reviews. The totality of this scientific review was used to develop our overarching advice and a final public meeting was held to present the draft report.

The full report and online resources present in detail the committee’s findings and conclusions from each approach, and following are some examples of the conclusions using these 3 methods for evaluating evidence. From data analysis, the Committee identified the food components that are over-consumed, food groups and nutrients that are under-consumed, and 2 nutrients of public health concern. Food pattern modeling was used to estimate how much added sugars can be accommodated in a healthy diet while still meeting food groups and nutrient needs and the nutritional impact of redistributing energy from the top sources of added sugars to help meet nutrient or food group recommendations. Systematic reviews were used to identify the components of dietary patterns associated with reduced risk of all-causes of mortality as well as specific diet-related chronic diseases. Following the recommendation from the NASEM report on redesigning the DGA process, draft conclusions from the systematic reviews were peer reviewed before being finalized.

The Integration chapter of the DGAC report presents the report’s major themes: The importance of healthful eating at each life stage, which can have a cumulative effect on health over the lifespan and the significance of dietary patterns as a framework for DGA recommendations within and across life stages.

The DGAC report was submitted in June 2020 and the Federal government is in the process of developing the 2020-2025 Dietary Guidelines for Americans. The report can be downloaded from www.dietaryguidelines.gov and contains links to additional online resources related to the work of the Committee. An important part of the Committee’s work is also to look to the future and a Future Directions chapter is included in the report. This chapter includes the Committee’s suggestions for research needs, future topics to consider, and suggestions on the process.

Dr. Schneeman served as the Chair of the 2020 Dietary Guidelines Advisory Committee. Dr. Schneeman is Professor Emeritus at the University of California, Davis, where she was a member of the nutrition and food science faculty and held several administrative positions, including Dean of the College of Agriculture and Environmental Sciences. She is the former Director of the Office of Nutrition, Labeling, and Dietary Supplements at the U.S. Food and Drug Administration’s Center for Food Safety and Applied Nutrition. Dr. Schneeman is a member of the World Health Organization’s Nutrition Guidance Expert Advisory Group subgroup on Nutrition and Health and chairs the subgroup on Policy Actions. She is currently a member of the Food and Nutrition Board and was on the National Academy of Sciences, Engineering, and Medicine’s Committee to Review the Process to Update the Dietary Guidelines for Americans and a member of the 1990 and 1995 Dietary Guidelines Advisory Committees. She has received several honors from professional organizations and isrecognized for her work on dietary fiber, gastro-intestinal function, development and use of food-based dietary guidelines, and policy development in food and nutrition.